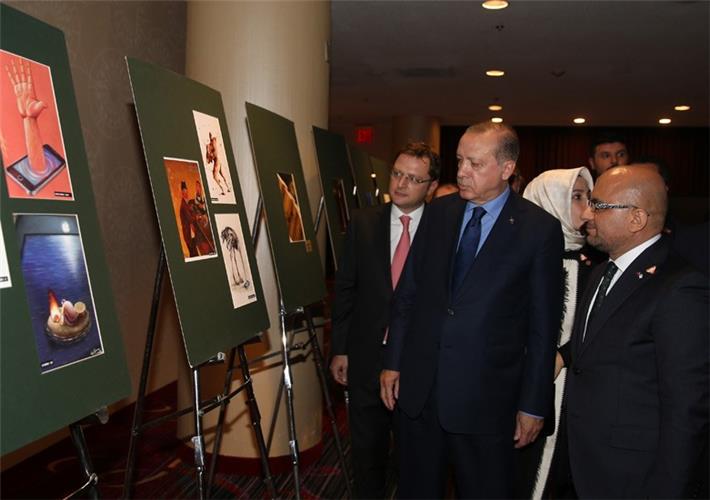 "We are fighting at the global level"
Speaking at the protocol ceremony held at Marriott Marquis Hotel, Yeşilay Chairman Prof. Dr. Mücahit Öztürk, expressed the belief that they established a federation to strengthen co-ordination and co-operation between the Country Green Crescent to carry out research, projects and activities in the field of addiction combat in 2016. Prof. Öztürk gave information about their aims and targets with the country's Green Crescent. And he said "We are committed to fighting for human dignity, respect and health with all kinds of harmful habits that harm society and future generations, such as tobacco, alcohol, substance, technology and gambling addiction, and to contribute to the struggles of societies"

6 continental organization is ongoing
Prof. Dr. Mücahit Öztürk noted that they wanted to bring their experience and experience to many countries of the world by introducing Green Crescent’s work on the international scene. In this direction, Prof. Dr. Ozturk increased the number of country green crescent, that they aimed to expand the scope of activity. Öztürk said "In the fight against addiction not only in Turkey. Green Crescent, which has become a brand in the international arena, is exhibiting a global struggle against the addiction with its international cooperation and organization of 6 continental regions. In this context, we continue our activities from Albania to Bulgaria, from Indonesia to Kenya and from Cyprus to Lebanon to Malaysia, Senegal and China "

"We are working on prevention and rehabilitation based work"
Every year in the world, 6 million people die of cigarette smoking and 3,3 million people die of alcohol-related reasons. Attracting attention to this, Prof. Dr. Mücahit Öztürk reported that the number of deaths due to drug use is around 200 thousand per year. He added that there are various problems in the field of dependence in each member country of the Federation.

Prof. Öztürk said "We use scientific and evidence-based methods to combat addictions in our work in the countries, and we aim to do global too. And this works are preventive, rehabilitation, advocacy and coordination-based studies. Our country Green Crescent have started to work in their own countries in this sense.

Our Federation plays an important role in the development of the fight against addictions in member countries, the projects to be implemented, and the capacity of countries to fight addiction. In this context, the study by Green Crescent in Turkey, implemented as a model for members countries " Professor Dr. Mücahit Öztürk noted that Yeşilay's cooperation and work with international organizations such as the United Nations, the European Union, the Council of Europe, the World Health Organization, the Organization for Islamic Cooperation (OIC) and the Federation of World Islamic Medical Associations (FIMA).

Professor Dr. Öztürk noted that the federation had the first organizational feature in the world to fight against smoking, alcohol, drugs, technology dependency. Following the protocol signing ceremony, T.C. President Recep Tayyip Erdogan, Green Crescent Chairman Prof. Dr. Mücahit Öztürk and his accompanying delegation visited the exhibition entitled "Addictions in the Eyes of World Cartoons" compiled from the works of International Green Crescent Cartoon Contest. In the exhibition, 510 exhibitors from 65 countries, in which caricature of addictions and damages were described, participated in 1225 works.