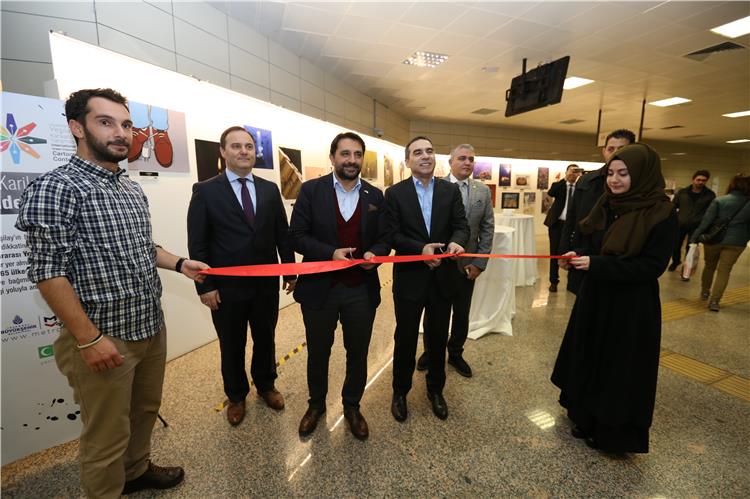 In order to raise the public awareness concerning fight against addiction and to encourage public reflexion about this important subject, we organized the International Green Crescent Cartoon Contest. The distinguished works of this contest started to be exhibited in Şişhane Metro with the support of Metro İstanbul. The exhibition will be free to visit until December 16th.

Selected works of the International Green Crescent Cartoon Contest, which 510 cartoonists from 65 countries resorted to 1225 cartoons are being exhibited in Şişhane Metro by support from Metro İstanbul. The opening of the ceremony was done by Yeşilay General Manager Savaş Yılmaz and Metro İstanbul General Manager Kasım Kutlu. Speaking at the opening Yeşilay General Manager Savaş Yılmaz said that special works which were exclusive from each other showed the dimensions and addictions that harm human and community life with the first contest. Once more, the global risk of addiction was seen through works from different countries and culture.

This contest help us raise global awareness as well as watch addiction from different perspectives. Now with the support of Metro Istanbul, people's will have seen the distinguished works of our contest in the metro, where thousands of people have passed by. We would like to thank Metro Istanbul for their continuance in order to raise awareness of addictions.” Metropolitan Istanbul General Manager Ali Firat, who attended the opening of the exhibition at the Şişhane metros, said that "We have 2 million passengers on the railway system stations and lines every day. We aim to make our journeys enjoyable by making various cultural and artistic organizations and underground a living center during their travels.

One of the most important of these studies is the work of our institutions like Green Crescent. We are delighted to be hosting our M2 line on this exhibit, which draws attention to the issue of dependence, which is one of the biggest problems of our era. We are waiting for all our passengers to the Şişhane Station until December 16th. " It was aimed that the artists mention to drugs, tobacco, alcohol, technology, gambling addiction, as well as sub-titles and the damages that addictions have on man and society too. The exhibition opened in Şişhane metro with the support of Metro İstanbul will be free to visit until December 16th.