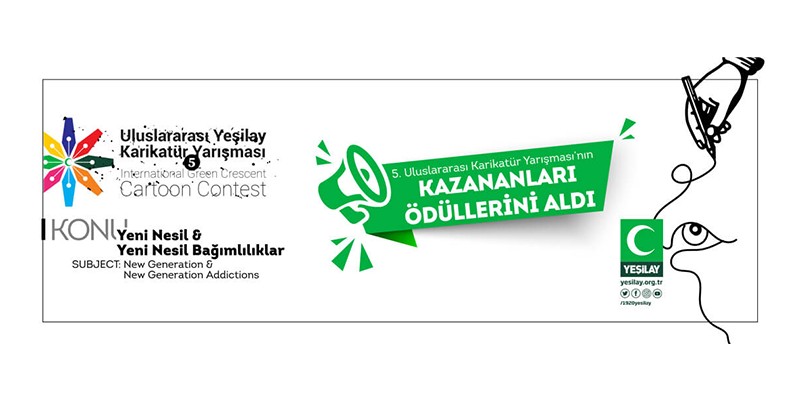 One of the notable Green Crescent projects tackling addiction, the award ceremony of the International Green Crescent Cartoon Contest, was held with the participation of cartoon artists from various parts of the world. The ceremony held to announce the winners of the contest organized this year for the 5th time, was held online. Given the theme of 'New Generations and New Generation Addictions', 1,088 participants from 69 countries applied with 2,034 works. The first place winner was Gökçen Çukadar from Turkey, while second place was awarded to Aristides Hernandez Guerrero from Cuba, and the third place prize was awarded to Ray Costa Nascimento from Brazil. Ehsan Ganji and Mehdi Azizi from Iran, and Anya Orlova from Thailand all received achievement awards based on their worthy efforts. In addition, the Mazhar Osman Special Award was presented to Kürşat Zaman from Turkey.

Expressing their pleasure at the interest shown in the International contest, Green Crescent Vice President, Dr. Mehmet Dinç, said:
'As Green Crescent, we work with the goal of making every person in the world free of addiction. As such, we implement many projects in line with this goal. One such project is the International Green Crescent Cartoon Contest, which we've been organizing for the last five years. We believe that cartoons are an essential way to increase the perception of independence in people's hearts and minds. From this perspective, we see the International Cartoon Contest as a contest and part of the tackle for independence. We would like to thank all artists and jury members who contributed throughout the contest to help tackle addiction. We believe that future free of addiction is not a dream for our country and our world but rather a goal that we can turn into reality with each passing day. We are confident in our steps towards achieving this goal.'

Stating that the immense interest in the Green Crescent's Cartoon Contest in its fifth year gives hope in the continuous tackling of addiction, Jury Member Professor Peyami Çelikcan further stated,
'It is not only the award winners, but all of the artwork submitted to the contest that contribute to raising awareness of addiction to greater audiences due to the universal language that cartoons possess. While last year's contest saw 479 participants from 55 countries apply with 906 works, this year showed increased interest with 1,088 participants from 69 countries, with 2,034 works. Despite the adverse conditions of the pandemic, the increase in and intensity of interest indicate there is significant awareness of the devastating effects of addiction. It is for this very reason that we would once again like to thank all artists who participated in the contest and supported our tackling of addiction.’